The ‘Concert Tour’ was all booked, and the Tour Bus was running when I met David outside the Berrima Gaol at 6am on Sunday the 5th December. Unlike many ‘rock bands’ before us, we were hoping to keep a low enough profile to not end up behind bars by the end of this epic tour.

In other ways, the 5-day road trip had the anticipation of a band on tour; 5 venues in 5 nights in 5 different regional NSW towns, the local ‘roadies’ and ‘producers’ were expecting us and the local men had their tickets ready to attend.
Somehow we had managed to squeeze it all in between stay at home orders and Christmas.

Our first stop south was Tumbarumba (It’s such a great name for a town; sounds like a concert just wanting to go off!) and we took a breakfast stop at the highly recommended Sir George in Jugiong along the way. 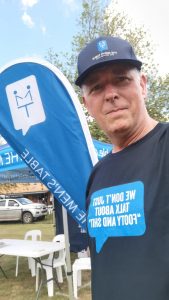 We were greeted warmly at the fairground at Tumba and donned our ‘roadie’ personas as we set up our ‘stage’ and props ready to perform. This was the first time The Men’s Table Gazebo had been set up, and it all worked (see picture), with the expert help from the seasoned Ian Westmoreland of Mentoring Men, who had their stage (booth) set up next door.

The Lifestyle Wellbeing Expo in Tumba began. This was put on by a local network of Bushfire Recovery folks to offer a broad cross section of support and agency offerings to this Fire impacted community and surrounds. We were stoked to be part of this event and got to meet a diverse group of people from across the community. We partnered with the Snowy Valleys LGA (thanks Andrew and Kathy) and the local Murrumbidgee Primary Health Network (thanks Maja) to spread the word and launch a new series of Men’s Tables in the region.

With the afternoon ‘Gig’ done, we rocked on further South to Albury where two fantastic local men, Pat Westwood and Chris Maney, had worked with us and the local media to rustle up 12 men for an Entree event at the Two Fingers Bar and Barbershop, a very cool and comfortable venue. We pulled in for an evening start, tuned our instruments and were treated to some excellent hospitality. The men got into the groove, with plenty of open and powerful sharing, and by the end of the night, MT44 Albury was born. They inhabit by far the most outstanding venue of any of our Tables to date.

This new Table has a diverse cross section of men including a good number of first responders, including Police, Rural Fire service men.

The next day we rolled back up to Tumba where another diverse group of local men joined us at the Elms Motel for the next ‘Show’ (Entree). Nine men agreed to join the newly formed MT45 Tumbarumba Table. The good news is that the local PHN sees the benefit of men using this format to serve each other in a peer to peer (non professional) environment. They love the longevity and self directed nature of our Tables, and have offered to support more Tables in 2022. Venues to be agreed.. but Khancoban/Corryong, Adelong/Tumut and Batlow could be on the cards.

Exiting Tumba, and encountering road closures as we headed over Kosciusko the next morning, we saw the lasting impact of fires across the Snowies. It was a beautiful but sobering drive, finishing as we rocked and rolled down Brown Mountain pass and dropped into the coastal humidity.

We had been kindly guided by David Hilhorst, a local Department of Primary Industries regional Bushfire Coordinator, to work with a range of local actors including the energised Sarah Lambert from Cobargo Wellness Group. In the final week lead up, we had to downscale our fully booked Entree to a more intimate gathering.

Arriving at the Cobargo Wellness Centre, we were warmly greeted and hosted by Sarah and were joined over dinner by a handful of local men with the intention of launching possibly two Tables in 2022 in the region known as the Triangle between Bermagui, Tilba and Cobargo/Quaama. Some of these people have been involved for many years in men’s work throughout the coast, and the country and we honour that lineage of men’s work. We’ll return again for an Entree on 21st February at the River Rock in Bermagui and if sufficient men are keen (which we expect), we will launch a second table on the 20th at the Progress Hall in Quaama.

Our venue for the next night was the Bodalla Arms Hotel, which the publican has cheekily advertised as the best pub in Bodalla (it’s the only one!); offering another fabulous room dripping with local history and good vibes.

We had received excellent support from Lin Wilton from the Eurobodalla Shire Council and also from other support agencies including Fortem. Thanks to them, the turn out was 12 men of whom ten are joining this Table. The Entree gigs were in flow, and the many and varied stories the men shared in The Vault were resonating deeply. By night’s end, another new Table was struck; MT46 Bodalla. Look out for another Table in Batemans Bay in the first half of 2022.

On our final morning of the tour, we pulled into Mollymook where the Resilience NSW South Coast Region team were gathering. We enjoyed the opportunity to ‘riff with them’, as we shared our experiences and learning from the field. Men’s Table is very proud to work with Resilience NSW as one of our Strategic Partnerships.

To wind out the fifth day, David headed back to Sydney and I picked up the co-hosting duet for the Nowra Entree at the Postman’s Tavern with one of our Co-hosts from a Kiama Men’s Table. Ten men attended and a few are heading to existing Tables in Kiama and Kangaroo Valley with the remainder to become the core of a solid Nowra Men’s Table. (A Table number is assigned to a new Table when the group reaches eight members). We anticipate another Table will launch in the Bay Area in 2022 supported by Shoalhaven Council.

This brought to an end the amazing 5 venues in 5 nights tour of Southern NSW. We met so many great men, and appreciated the groundwork and local community activation of our partners. We look forward to ‘making more music’ with them, and birthing a range of new Tables during 2022. A big thank you to all our partners for making this road trip adventure possible.

Want to have a chat or ask a question before you register for an entree? We’d love to hear from you. Please give us a call or fill out this form and a man who sits at a Table will get back to you.

If you are interested in exploring partnering with us or providing in-kind support, please contact Anthony Garnham on 0411 311 214 or email anthony.garnham@themenstable.org

Notify Me When Released